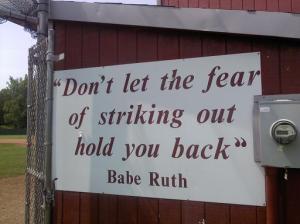 I’ve always wanted to be an actress. There I said it and didn’t back away from the statement. It is what it is, or more like “was what it was” at this point. Anyway, I’d sit in movie theaters knowing in my heart that I could do that too. I could be up there on screen speaking from my heart and people would hear me. They’d listen and they’d feel it the way I always “felt” what the actors said. “Felt it.”

I wanted to be the one on commercials who held the product gracefully between index finger and thumb and touted it so perfectly that viewers simply had to run out and buy it soon. Actually, I used to practice in front of the bathroom mirror. Holding a tube of Crest or a plastic bottle of Prell, I’d gush about how fighting cavities or making hair “radiantly alive” would change your life, just like the girls on the commercials I watched after The Brady Bunch and Columbo.

I talked about this dream so often that finally, when I turned 15, my mom helped me begin the process by sending me to Weist Barron school in NYC. Here I learned “how to be” on commercials and soap operas. They taught us how to emote properly and to believe in the products so that we’d come across as genuine on the screen. This was the start of my career or so I’d hoped. After getting my certificate of completion I was quickly signed with a modeling agency named Mary Ellen White. I didn’t comprehend what that meant at the time though I remember thinking “someone picked me” and that in itself seemed enough. Each day after school I had to check in with the agency to see if there were any auditions lined up for me that afternoon. These “go sees” took place in various studios across Manhattan and were put together by art directors, casting directors, magazine editors, catalogue houses and other industry people looking for talent or a specific look.

I remember so vividly the casting call waiting rooms and looking around the room at the other girls my age while thinking “Damn, I wish I looked like her or her or her!” “I’ll never be picked compared to ‘her’!” And so, after awhile I simply stopped going. Neither my stomach nor heart could handle the self doubt. I simply couldn’t stand that feeling in my gut of “Not Enough-ness.” It stopped me dead in my tracks whenever I got to the other side of the door – the one the camera and all the big shots (ad execs etc.) were on.

You were meant to confidently and gracefully waltz in and read the sides you’d studied in the other room in front of the camera (and total strangers) as if it was the most natural thing in the world. But since I went into such self doubt while rehearsing in the waiting room I’m sure my acting didn’t quite flow gracefully and confidently the way it did in front of the bathroom mirror. The “she is better than me” mentality got in my way every single time. What a waste.

I read an article recently about Mary Ellen White, the agency director I was signed with back then. It turns out she was a pretty big deal in New York and Hollywood talent and developed careers of many actors who appeared in most of my favorite television shows, (“Room 222′, “Little House on the Prairie”, “Happy Days”, “Eight is Enough”, “Laugh-In”, “The Love Boat”, “Streets of San Francisco”) the ones I watched regularly after giving up on the auditions. I had no idea how close I was to being able to get where I have always wanted to go. I just couldn’t see. I didn’t know what I didn’t know.
The other day I took out my old head shots and wanted to cry for that lovely young girl in the photos. I wished I could go back to “her” and honor and inspire her to believe in herself and her worth. I wanted to cry out in agony over how sad it was that she couldn’t see her own beauty. I also knew absolutely as I stood holding the photos that “this” fifteen year old had as much to offer to the folks on the other side of the door as the other girls “she” saw as better did. What a shame that “she” didn’t know it.

Today, 35 years later I’m trying to help “the girl” in the photos feel good in pictures taken of “her” today. I’m not “where I want to be” yet in the work of feeling “enough” but it’s miles away from where I was in those headshots. Today I am able to sit in a room filled with other beautiful women and hold my head up understanding that we each have our own grace, beauty and strength as well as our special gifts that make us unique. I can stand still in my own “ness” and own it. I can say out loud that I wanted to be an actress and could have been. I was on the way. Maybe by saying that out loud some fifteen year old struggling with her own self image will read it and then “get out there and be one.” Maybe believing that I believe will be enough until she can get there herself.

Ladies, listen up!” We each have our own spectacular beauty, and part of that comes from what we perceive as our flaws and frailties, from owning them instead of shying away from them. I realize now that on those auditions each one of us sitting in that room absolutely had some magical spark of “she-ness.” Unique, special, beautiful, talented, gifted and quirky. And maybe, just maybe the big wigs in the other room didn’t even know what they wanted until they saw it, but how could they see it when I couldn’t see it to share it?